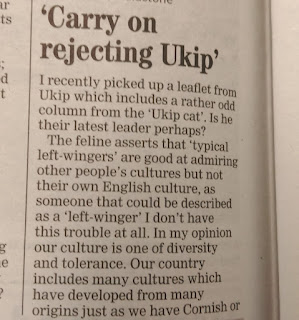 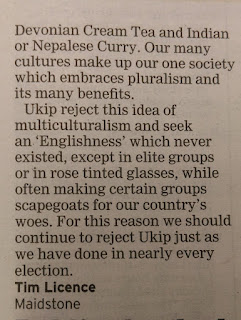 'I recently picked up a leaflet from UKIP which includes a rather odd column from the 'UKIP cat'. Is he their latest leader perhaps?

The feline asserts that 'typical left-wingers' are good at admiring other people's cultures but not their own English culture, as someone that could be described as a 'left-winger' I don't have this trouble at all. In my opinion our culture is one of diversity and tolerance. Our country includes many cultures which have developed from many origins just as we have Cornish or Devonian Cream Tea and Indian or Nepalese Curry. Our many cultures make up our one society which embraces pluralism and it's many benefits.

UKIP reject this idea of multiculturalism and seek an 'Englishness' which never existed, except in elite groups or in rose tinted glasses, while often making certain groups scapegoats for our country's woes. For this reason we should continue to reject UKIP just as we have done in nearly every election.'
Posted by Tim Licence at 06:31